Advertising Fraud: Are Brands OK With It? 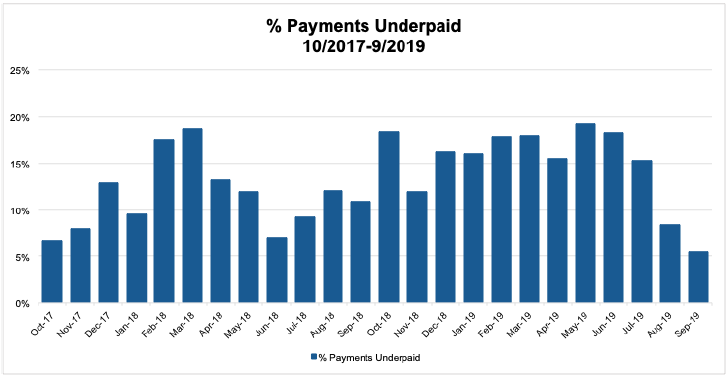 The norm in digital media is that you have to wait to get paid. 30-90 days, sometimes longer. That’s because digital media payments are often paid on net terms. Often times though, payment hits at a different time (i.e. 62 days instead of net 60). And just as often, there is a variance between the invoiced amount and the amount actually paid. We call this variance the Paid Differential in our digital media payments report. It’s not uncommon that the Paid Differential is solely due to advertising fraud.

In our report, we noticed that the Paid Differential got smaller and smaller. In other words, the percentage of payments we received in Q3 that were underpaid relative to the invoiced amount steadily declined.

Here is a chart showing the data dating back to October, 2017. 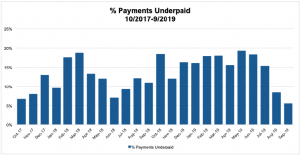 You’ll notice that the percentage of payments that were underpaid peaked in May 2017, about the time when the off-set Sizmek payment from SSPs was to hit publishers. Since then, it has steadily declined. We have a theory as to why underpayments are occurring less – technology. So many vendors have popped up to solve the fraud question, from bot detection to AI-based brand preservation technology. But in 2020, the traditional market for fraud detection is mature, having consolidated in recent years with Distil acquiring AYAH? and then Imperva acuiring Distil (among others). A new market will emerge to detect known fraud, but what the market needs now is a solution to detect the new/unknown fraud. That being said, we noticed that traditional fraud – like robotic traffic and fake clicks – has held steady among our publisher base at 1-2% monthly. Why? First, why are there offsets?

Digital advertising payments can be offset for any number of reasons.

OAREX assumes credit and financial risk, and does not fund invoices generating from contracts where the paying company can back out of any payment obligation for incomplete or incorrect work. We do not accept fraudulent risk for obvious reasons. When we analyzed the data, we noticed that our digital publishers have 2-3% robotic traffic, like clockwork, every single month. But their payments were being offset by less than 1%. What does that tell us?

Brands Expect And Accept A Certain Level of Advertising Fraud

In theory, if robotic traffic is offset by 2-3%, then the payment should be offset 2-3%. Now that presumes a lot of things have to happen to take place, but assume for now it’s just the “model”. Technology is advanced enough to the point that this isn’t a ridiculous idea. If robotic traffic is 2-3%, then the payment should be offset by 2-3%

Advertisers are starting to accept a certain level of fraud. They just bake it in as a cost of doing business and save the energy, time and frustration in trying to sniff out the 2-3% of bad traffic. Meanwhile, fraudsters know this and operate at a level that is “acceptable” to advertisers and media buyers. If you ramp up your fraud, so the theory goes, you’ll get caught, so operate “below the radar” within the acceptable levels (that’s not advice!)

You can read our full payment study here.